On February 24, 2015, a special luncheon was planned at the Grandover Resort & Conference Center in Greensboro at which eleven state Baptist institutions and agencies would have honored individuals and couples for their exemplary service and giving. This award is called the NC Baptist Heritage Award.  The keynote speaker would have been Paul Mullen, Retired Director of Church and Community Relations at NC Baptist Hospital, Minister of Congregational Care at Ardmore Baptist Church, Winston-Salem).

Due to bad weather, no presentations occurred at the Grandover.

The event was cancelled and the various entities had to make their own presentations independently.

Margaret’s was presented with her Heritage Award Plaque on a Sunday morning at her church in Madison, NC. 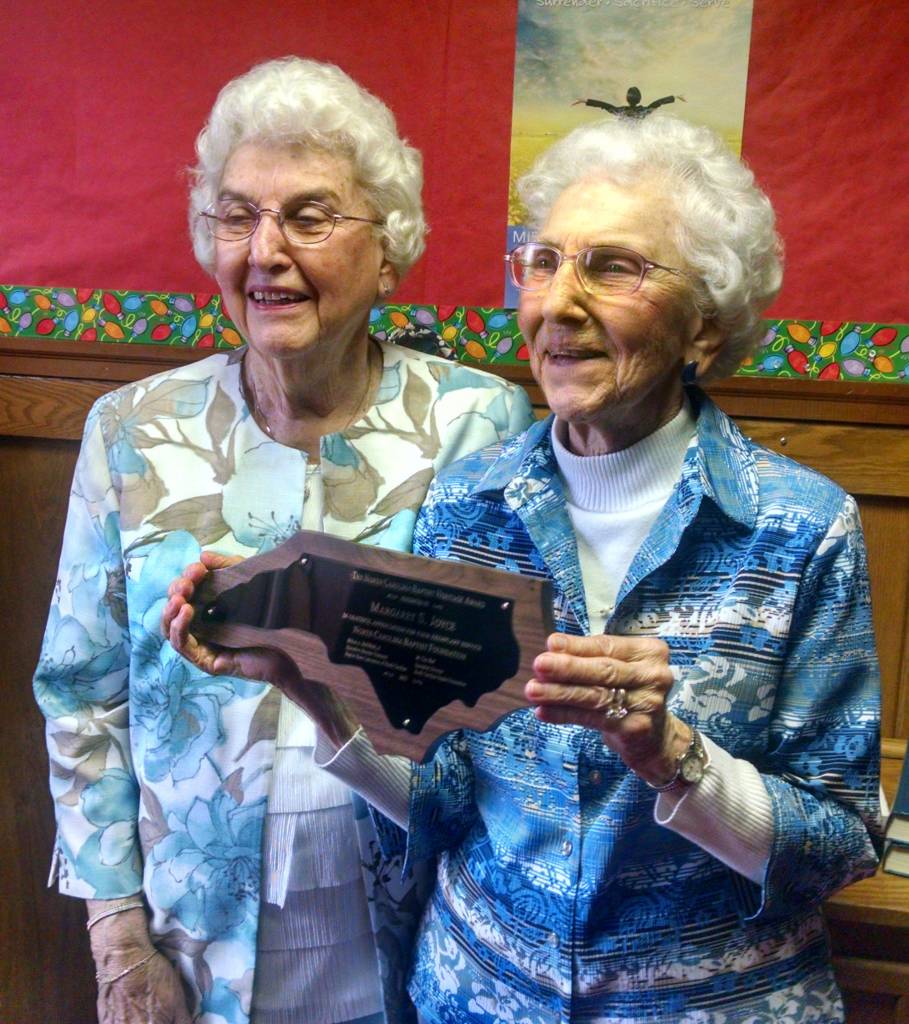 Margaret Joyce and her sister

We are honored to recognize Margaret Joyce, right, as the Baptist Foundation’s recipient of the NC Baptist Heritage Award for 2015. Margaret Joyce has endeared herself to the staff of the North Carolina Baptist Foundation as we have witnessed first-hand her love for ministry and, what we would call, her “wildly generous” giving spirit. She was not born a person of financial privilege, growing up on a small farm in Wilkes County with a sister and two brothers. Yet, her upbringing instilled in her an appreciation for the simple blessings of life, as well as an ability to dream big.
The ability to dream big is quite evident in her academic accomplishments, earning an undergraduate degree from American University in DC, a master’s degree in
counseling from UNC-Greensboro, as well as studying at the University of Cincinnati Conservatory of Music. She went on to enjoy a teaching career of more than 36 years
during which she established the very first guidance-counseling program at Madison/Mayodan High School. At the same time, her love for music has led her to
serve as organist at her church, Grace Baptist Church in Madison, for over 40 years.
Margaret married her husband William in 1953. After he graduated from UNC-Chapel Hill, he worked 34 years for NC Services for the Blind. You see, William, who died in 2000, was blind from birth. Early in their marriage, Margaret and William developed a giving spirit. Over the years, they have established endowments that will support, in perpetuity, church music ministries, college scholarships for needy students, children’s ministries both at home and abroad, as well as scholarships for those preparing for ministry at Fruitland Baptist Bible College. Because of her generosity and fund raising efforts, Caraway Conference Center recently named a building for Margaret.

Bellow are the eleven honorees of the 2015 North Carolina Baptist Heritage Award.